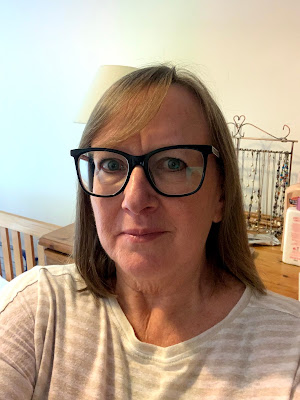 Turning 59 at the end of May and knowing I'll be 60 next year, feels fairly surreal.  I don't feel much older than I did about 30 years ago but oh, how much has happened in those years. I wouldn't change anything because it's made me who I am today.

I had a message this morning from a friend in South Africa and we've been taking a walk down memory lane. Would you want to be young again?  I wouldn't, I enjoyed it when I was young, but I can do without the angst of being young! Nowadays people have to take me as they find me and, if I'm not their cup of tea, that's fine! I don't like to think of being a grumpy old woman, instead I've just added more character.

When I think back, I've been lucky.  I was born in Scotland but moved to South Africa at 3, when Dad was offered a 2 year contract over there. Those 2 years turned into 26 for me as I returned to the UK in 1991.  My childhood, growing up in South Africa, was very different to that I would have had, had we stayed in Scotland.  I have such good memories of carefree days, of living in a flat on the beachfront at 19 and travelling at 22. That was when I met family and cousins who I'd been penpals with but didn't really know. It's probably the one thing I wish could have been different. I would have liked to grow up with my cousins and have that close bond but, at the time, I knew no different.

I married in 1987 and Hugh and Claire were both born in South Africa. We returned to the UK in 1991 and Emily was born in England. I was lucky enough not to have to work while the children were growing up and I'm very grateful for having had that time with them. We had holidays overseas and went back to see family in SA to begin with but slowly most of the family also moved back to the UK. I have a brother still in SA and one who moved to Australia nearly 10 years ago but both my sisters now live nearby. Mum and Dad came to England in 1996 and Mum lives 5 minutes from me. I went back to work in 2014 and separated from my husband the following year. Emily and I will have lived in our current house for 6 years next month and they've been good years for us.

The pandemic has meant I've worked from home, virtually full time, since March last year and I really enjoy it.  We are lucky that Claire and my granddaughters formed part of our bubble as soon as they were able to and we have been able to see them as normal. However, this time of isolating has given me time to reflect and has made me realise I'm more of an introvert than I thought I was.  I enjoy seeing people but I'm more than happy in my own company and with my family.   I enjoy a slower pace of life and, perhaps one day, I would like to move back to Scotland (finances allowing). It feels like home when I go back.!

So, despite having areas to work on and deal with (but don't we all) I'm quite happy to be 59!