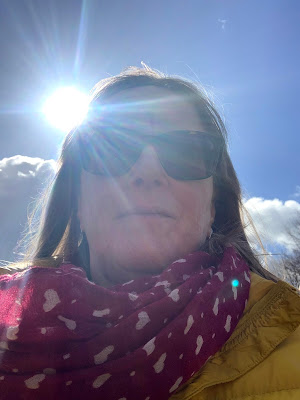 I recently bought Juliet Sullivan's The Gallstone-friendly Diet as I continue to research how best to manage my diet while I wait for gallbladder surgery.  I started reading the book straight away (Kindle edition = instant download) and finished it yesterday.  If nothing else it's made me realise that how I feel day to day, at the moment, is probably how most people feel while waiting for the surgery.  Somewhere there's a touch of the 'stiff upper lip' in me and I don't like to say too much about it but this book validated how I feel. There is a constant feeling of not being quite right, of being worried about another flare up and of having a virtually constant niggling pain.

My episode started back in October 2020 when, after dinner one evening, I became really uncomfortable and my back was so sore.  After a little while I went up to my bedroom to see if lying down would help. The pain was like nothing I had felt before (and I've given birth twice without any pain relief) and it felt like it was cutting through me from front to back. I then started being sick and presumed I was coming down with something / had food poisoning.  This carried on for a few hours and by 3.15 am. I felt so bad I didn't know what to do with myself, I couldn't sit, lie or stand and was in agony - I phoned Emily, who was in the next room, and asked her to come in to me.  She took one look at me and called 111 (Medical advice line) who told her I needed to get to hospital straight away. I couldn't face getting downstairs to the car so she and Jack called an ambulance and I was taken to East Surrey Hospital.   I was given morphine, they ran tests, I had a CT scan and X-rays and in the early hours I was told that I had a large number of gall stones but could go home again and to take pain killers.

Claire and Emily came to pick me up after Claire had dropped the girls at school and I went straight to bed when I got home. I stayed there for the rest of the week and didn't feel like it was getting any better. On Saturday afternoon I started shivering and could not stop. I was freezing and couldn't get warm.  Again, poor Emily was called and she took one look at me and phoned 111 again (despite my protestations). After describing what was happening -  apparently I was as white as a sheet and my lips were turning purple, as well as not being able to stop shivering/shaking, she was told to take me straight to the Princess Royal Hospital.  I spent another night being tested and given morphine to control the pain until, in the early hours of Sunday morning, I was transferred to Brighton Hospital because they felt I needed to be seen by the surgeons.  Long story short - I was admitted to a ward with acute cholecystitis (gallbladder infection) and was on IV antibiotics for the first three days.  I was finally discharged on the Friday, on the condition that I returned again on the Monday for more blood tests to make sure my blood levels were settling.  Fortunately they were and I was able to stay at home.  In total I was off work for nearly a month.

What I hadn't anticipated was how long it would take me to start feeling more like myself again.  I couldn't go out and walk Harry for virtually 2 weeks and when I did start going I couldn't walk him, Emily still had to take his lead and we would shuffle round a shorter route just so I could get out of the house.  It's now nearly 6 months later and I'm still not back to 'normal'.  I have less energy and I'm in bed before my granddaughters because I feel exhausted after work. I need to get better at sticking to a low / no fat diet - if I have anything with slightly more fat in it, the pain in my side soon flares up to let me know to cut back again. I think diet has been the most frustrating thing because you aren't given any definite guidelines of what you can and can't eat. For the first 8 weeks after getting out of hospital I ate virtually no fat at all but then I was told I could eat low fat.  What is low fat though - if you eat things that are less than 5g per serving that's supposed to be low fat.  However, if you eat a number of things which are under 5g per serving - how much does it all add up to and how much fat are you eating in the whole day - is it really low fat? That's what I'm trying to work out at the moment. If anyone has any ideas, please let me know!

Looking on the bright side, the weight I gained at the start of the pandemic has gone as I've lost just over a stone since this all started, so there are silver linings! And if I have to wait another 6 months for surgery, I might lose a bit more ;)

Email ThisBlogThis!Share to TwitterShare to FacebookShare to Pinterest
Labels: 2021, Health